A. David MacKinnon is a Toronto based songwriter, producer and recording engineer. From the late 90’s til the late 00’s he was one half of the band FemBots. In the years since the last FemBots album David retired from live performance, put his guitars away and abandoned singing to focus on instrumental, piano based music.

MacKinnon’s first solo record “THE PAST IS A FOREIGN COUNTRY” was released in early April of 2012. The songs might best be described as the imaginary soundtrack to a film that doesn’t exist. The record draws inspiration from the sounds of mid-50’s Jazz (Dave Brubeck, Thelonious Monk, Gil Evans), 70’s action films (French Connection, The Taking of Pelham 1-2-3), the songs of Hoagy Carmichael and early Soul and Gospel music.

To bring the songs to life MacKinnon drew on a group of longtime friends – Jay Anderson, Paul Aucoin, Tavo Diez de Bonilla, Matt Foy, Tyler Greenleaf, Jay Hay, Paul Lowman and Jeremy Strachan. The result is a record that retians the imagery and lyricism of MacKinnon’s work with the FemBots. without relying on words and voices to tell the story.

A.DAVID MACKINNON “THE PAST IS A FOREIGN COUNTRY” (weewerk)042

Now available on iTunes and ZUNIOR! 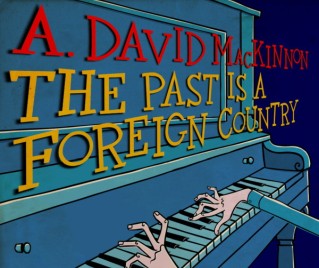