Harmonica, from Oslo, Norway, consists of three women and two men that play sweet and danceable indie pop-rock with a new passion you’ve yet to experience. Harmonica is all about fantastic music, dancing, rock’n roll and having fun and their amazing live show contains visual effects, playfulness and tons of energy. Harmonica is your new favourite band!

Harmonica was asked to play with The Magic Numbers and they played at the Norwegian Wood Festival with artists like Lou Reed, Roger Waters, Gnarls Barkley, Mew and Martha Wainwright. Harmonica has rocked Oya Festival’s club nights in Norway the last three years running. They also participated in Scandinavia’s biggest and most important music festival, by:Larm, in February this year. The band received a lot of attention during that event, both in Norwegian and International press, and led them to being invited to play at the Canadian Music Week Festival in Toronto in March. A memorable three nights of amazing showcasing had Chart Attack elect Harmonica the “best live act” at the festival, grading them 99 out of 100, and saw them make many new fans.

To celebrate their return to Canada for the Pop Montreal Festival, Harmonica and (weewerk) are releasing their new limited edition four song EP, “Miaow, Miaow… BARK!”. The EP will be available from the band at their shows and will be available digitally exclusively from Zunior.

Harmonica is showcasing twice during Pop Montreal, Thurs Oct 4th at Le Divan Orange at 2:00pm and on Friday, Oct 5th at the (weewerk) label showcase, in collaboration with SoundProof Magazine. Label mates United Steel Workers of Montreal, Ox, The Barmitzvah Brothers and Two-Minute Miracles will join them in the in cause. Harmonica will play promotional shows in Ottawa and Toronto, which is also in collaboration with SoundProof Magazine. 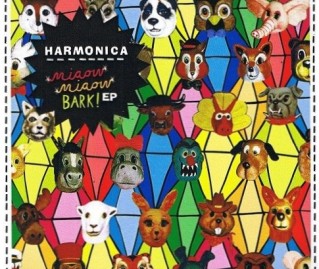