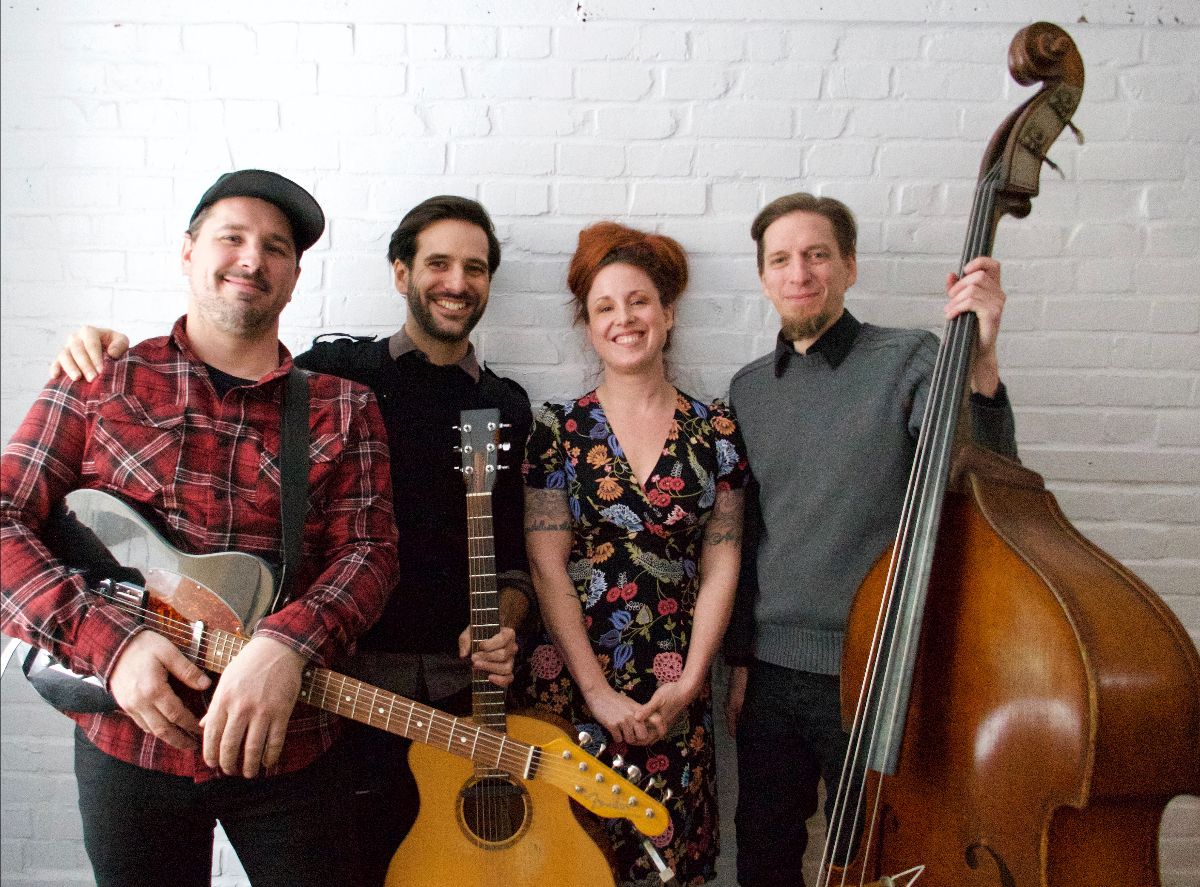 With a sound that combines Classic Country, Jazz and Western Swing, Montreal’s The Slowinks have successfully charmed their hometown and are now poised to do the same to the wider world with their debut album Stay With Me A While, released April 2, 2021 on (weewerk).

Recorded in February 2020 by acclaimed Quebec singer/songwriter Fred Fortin at his home studio in the wilds near Lac Saint-Jean, the eight tracks on Stay With Me A While capture The Slowinks in their purest form yet.

With powerhouse vocalist Felicity Hamer, formerly of United Steel Workers of Montreal, front and centre, the drummer-less combo also consisting of lead guitarist Martin Tremblay, rhythm guitarist Olivier Pépin and double bassist Mathieu Deschenaux evokes a certain degree of nostalgia while at the same time infusing their original songs (plus a cover of the Tin Pan Alley standard “Ain’t Got Nobody”) with an undeniably modern energy.

That energy was really a by-product of the recording process, as Martin explains. “The songwriting was surprisingly last minute. Initially, we planned to record mainly covers, but a month prior to the sessions we wrote a new song, and that inspired everyone to write new material. In the end, we shed most of the covers. We really enjoy pushing ourselves when it comes to songwriting, and with each of us having about 20 years’ experience in the Montreal music scene, songs come to life fairly quickly.”

He adds, “I think our wide range of influences is our strength. Like, if Dolly Parton and Django Reinhardt had a baby… We are that baby!”

A sense of spontaneous combustion is certainly evident on the album’s first single, “One Shoe,” on which Felicity cuts loose in full Rose Maddox-meets-Neko Case fashion. She says the song was written with her longtime friend Maïa Davies as a send-off just prior to the latter’s move from Montreal to L.A. where she’s continued her work as a songwriter/producer. “Maïa asked me to think of an incident—anything—that might make for a good story. A long ago, fuzzy episode came to mind about one of those crazy nights all of us sometimes have where you end up going home with only one shoe. In the weeks that followed I was delighted to write Maïa to let her know that those lyrics had grown into a full-blown love song to my boots. Some lessons are learned the hard way; now I wear boots, they stay on my feet much better.”

The Slowinks also deliver their fair share of honky tonk heartbreak on songs such as “Nobody But You” and “Let Them Talk,” while proving themselves just as potent en français with “Solange.” In fact, Stay With Me A While’s haunting title track began life as one of Martin’s demos with French lyrics. Felicity chose to write new lyrics in English to reflect her own experience of trying to hold onto someone she lost, and in the process giving the song an entirely different power.

Felicity says, “Just weeks after our return from recording, the pandemic hit Montreal and the song has since taken on even more meaning. This is just one of those songs that feels like a memory—‘These streets are filled with ghosts, hard to crack a smile. I miss you the most, stay with me awhile.’”

Indeed, one of the great joys in listening to Stay With Me A While is knowing it was recorded just before the pandemic, when there was still fun to be had. Its overall lively sound will certainly suffice until The Slowinks can do what they do best on stage again, and once you hear Stay With Me A While, you’re sure to begin counting the days until that time comes.