Newfoundlander Don Brownrigg wants to travel far. From the mountains and rivers of the Codroy Valley to his newfound homestead in Halifax, his musical meanderings are catalogued in his wonderful debut release “Wander Songs”. Don creates non assuming folk-pop music that has spirit, is sincere and heartfelt in its delivery.

This very grass-roots project was produced by Brownrigg and recorded by Halifax engineer and musician Donald Mackay at Spaces Between Sound Studio.

The Telegram – “It takes the listener in instantly and, like a good novel, keeps you captivated from beginning to end. Acoustic based, the songs don’t try too hard and aren’t intimidating in any way – it’s just beautiful, truthfully written music.”

Chartattack Shannon Webb-Campbell September, 2007 – Wander Songs is a winding soundscape of thought, as the album is a personal passage through the roots of friendship, the yearning for love and growing into oneself. Brownrigg is a self-proclaimed thinker, observer and creator. His soft-spoken pensiveness reflects the precision and artfulness of his music.

With a little help from his friends, Brownrigg has created a timeless anthology. Over the course of the past few years he’s been simmering, finding his footing around town, lending his keyboard talents to Davis and vocal help to Vanessa MacArthur. He’ll soon be found in the liner notes of Jesse Dangerously and The Heavy Blinkers ‘ upcoming releases. With the aid of skillful engineer Donald Mackay, this quiet background man will soon shine in the forefront. 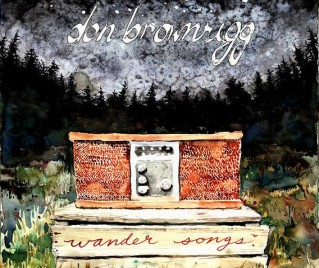