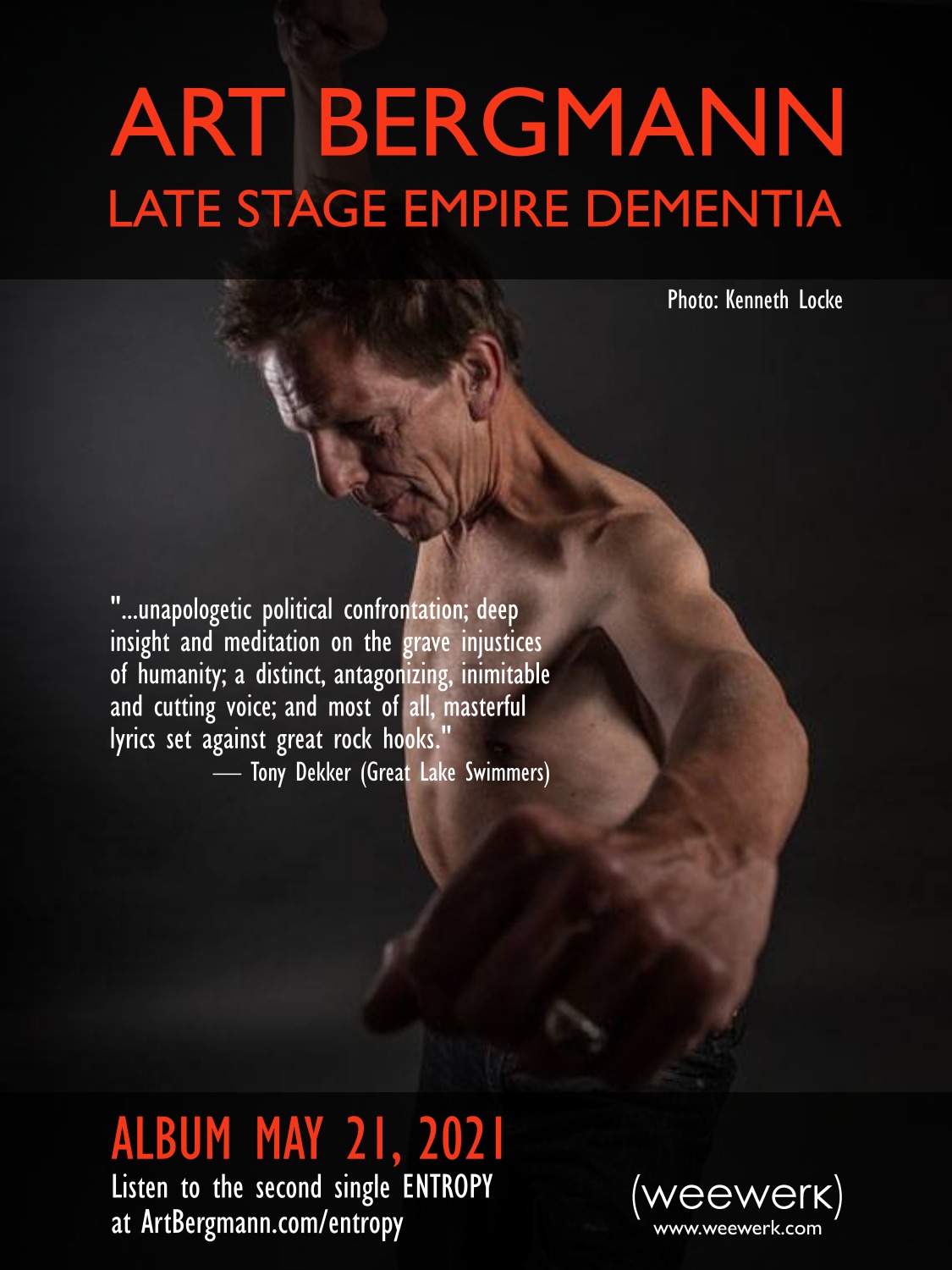 In typical Art Bergmann fashion, “La Mort de L’Ancien Regime”‘s breezy melodicism blends seamlessly with lyrics demanding action against unfettered corporate power, this time using the French Revolution as a touchstone. When asked to expand on its message, Bergmann pulls no punches in saying, “This song is the joyous anthem the kids will be singin’ down the years after the great banksters are finally dead and gone. I would have said ‘pigs who reign over us,’ but that is an insult to our animal friends who are smarter than our sacred dawgs.”

As one of Canadian punk rock’s foundational artists, Art Bergmann remains an unflinching social critic on Late Stage Empire Dementia. Its eight songs sonically run the gamut from the jagged, speaker-shredding rock he’s long been known for, to the experimental, acoustic-based soundscapes he introduced on his 2016 Polaris Music Prize long-listed album The Apostate. Lyrically, Bergmann takes aim at political corruption, the dual unchecked epidemics of guns and drugs, and the plight of refugees yearning for a better life. Late Stage Empire Dementia was recorded throughout 2020, with basic tracks laid down in Calgary at Lorrie Matheson’s studio Arch Audio and most other tracks completed at Russell Broom’s studio, Broom Closet.

Although Broom and longtime Neko Case collaborator Paul Rigby handle the bulk of the guitar playing, the song “Christo-Fascists” features a rare guest appearance by legendary MC5 co-founder Wayne Kramer, whose trademark buzzsaw tone remains as potent as ever. Yet, for each great example of politically charged rock on Late Stage Empire Dementia, such as the previous single “Entropy,” there is an expansive, hypnotic piece like “Los Desaparecidos (Border Art)” or the nearly 10-minute title track that further illuminates Art’s evolution as a songwriter—completely unafraid to enter uncharted territory. It is that bravery that makes Art Bergmann’s voice as important as ever, and places Late Stage Empire Dementia easily among his finest works.